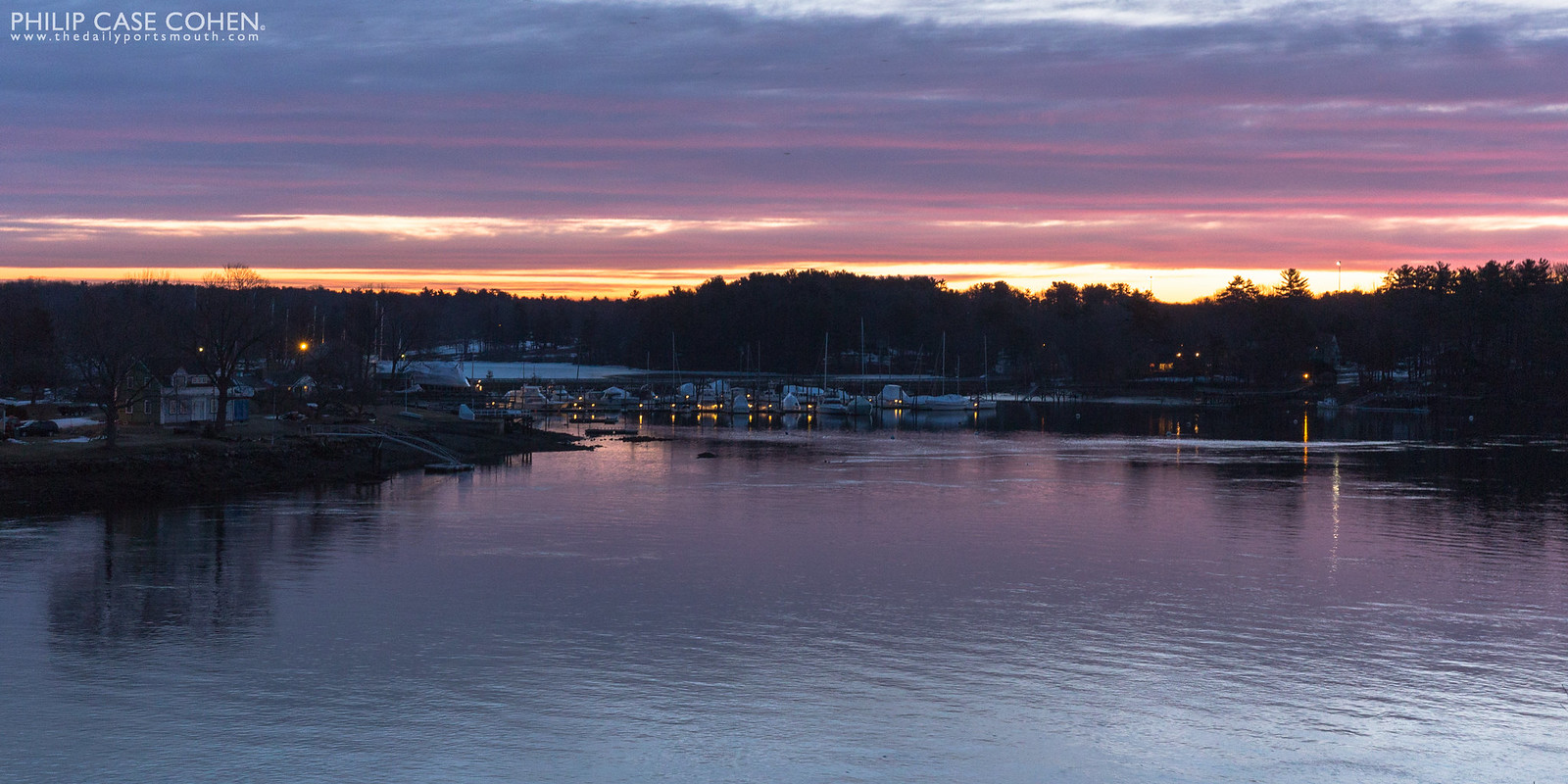 Early Morning Light Over The Marina

The early morning light grazes the undersides of the clouds.  The spring sunrises and sunsets have been beautiful – all of the early and late date color helps to forget about the snow.

I’m feeling a little more abstract lately – and loving this golden sunrise shot of the Piscataqua River reflecting the first rich rays of sunlight.  Be sure to click this one to see it large.

Hope everyone is enjoying the dreary weekend!

Portsmouth’s railroad tracks run downtown from Islington Street, across Market Street and along the Piscataqua River all the way to Atlantic Heights and further on towards Public Service of New Hampshire’s power station (which can be seen generating a plume of smoke in the distance).  The fresh snowfall, the blue sky that finally made its way out, and the cargo car made for a cool shot.

The power plant is located on the banks of the Piscataqua River and can also be seen in THIS POST from the summer, I highly suggest you check it out.

I wanted to share with everyone a taste of the video footage that I’ve shot over the previous year during my voyages around town (be sure to view fullscreen in HD).  This is all footage shot with my Canon 5d Mark II camera, which I’ve had for just under a year, and is capable of HD video…but unfortunately I’m still learning and don’t really know what I’m doing beyond the still shots. I had fun compiling the footage, which has been set to Vampire Weekend’s song “Run” from their new album Contra.  Please drop a note and let me know your thoughts!

Today’s shots are a pair of sunrises from my stairwell in Atlantic Heights – the first shot (above) with an intense red glow and another more subtle, yet beautiful morning. I-95 can be seen in the distance.

Here’s a third shot from after the snow storm on January 18th once the sun made an appearance and the snow was still sticking to the trees.

During sunrise, the first rays of sun peek out from just under the I-95 bridge from my window.  I hadn’t seen this time of day in quite some time, I’m not usually awake until much later when the night sky is completely gone.  This was a nice treat…maybe I’ll have to try it again soon.

Freighters frequently travel up and down the Piscataqua River during the winter months to either deposit or receive resources for transit…but early this August, this freighter – the Atlantic Superior, made its way up the Piscataqua River towards the Schiller Station (owned by Public Service of New Hampshire).  This shot almost captures the massive scale of the boats with respect to the river they’re traveling up, and the little neighborhood that is situated along the river’s banks.  Always a gorgeous sight if you happen to catch it.

Since my house only looks like this once a year with all the plants in bloom, thought I’d capture it to remember during the colder winter months.  On top of being a beautiful day in Portsmouth, today was also National Night Out – a night aimed at crime and drug prevention.  Sixteen local neighborhood associations hosted events in a coordinated night out across the country – Atlantic Heights hosted a pot luck in Big Rock Park, which was well attended by residents and city officials, including the intense Seacoast Emergency Response Team (Portsmouth’s SWAT team) armored vehicle shown below.

This weekend marked the 10th Annual Garden Tour of the Atlantic Heights Neighborhood.  20+ gardens were open for the tour, which featured cottage-style backyard pocket gardens containing many colorful flowers of varying types.  Visit a sampling of the tour in my FLICKR gallery here:  FLICKR GALLERY.

Now that I’ve heard (and said) numerous jokes about building an ark with all the rain we’ve had, let’s all take a minute to pause and reflect….it could be worse!  Here’s a shot from an early morning this winter in my front yard, Big Rock Park in Atlantic Heights.  Rumor has it that the sun might show it’s face this weekend.  Check back for an afternoon post.