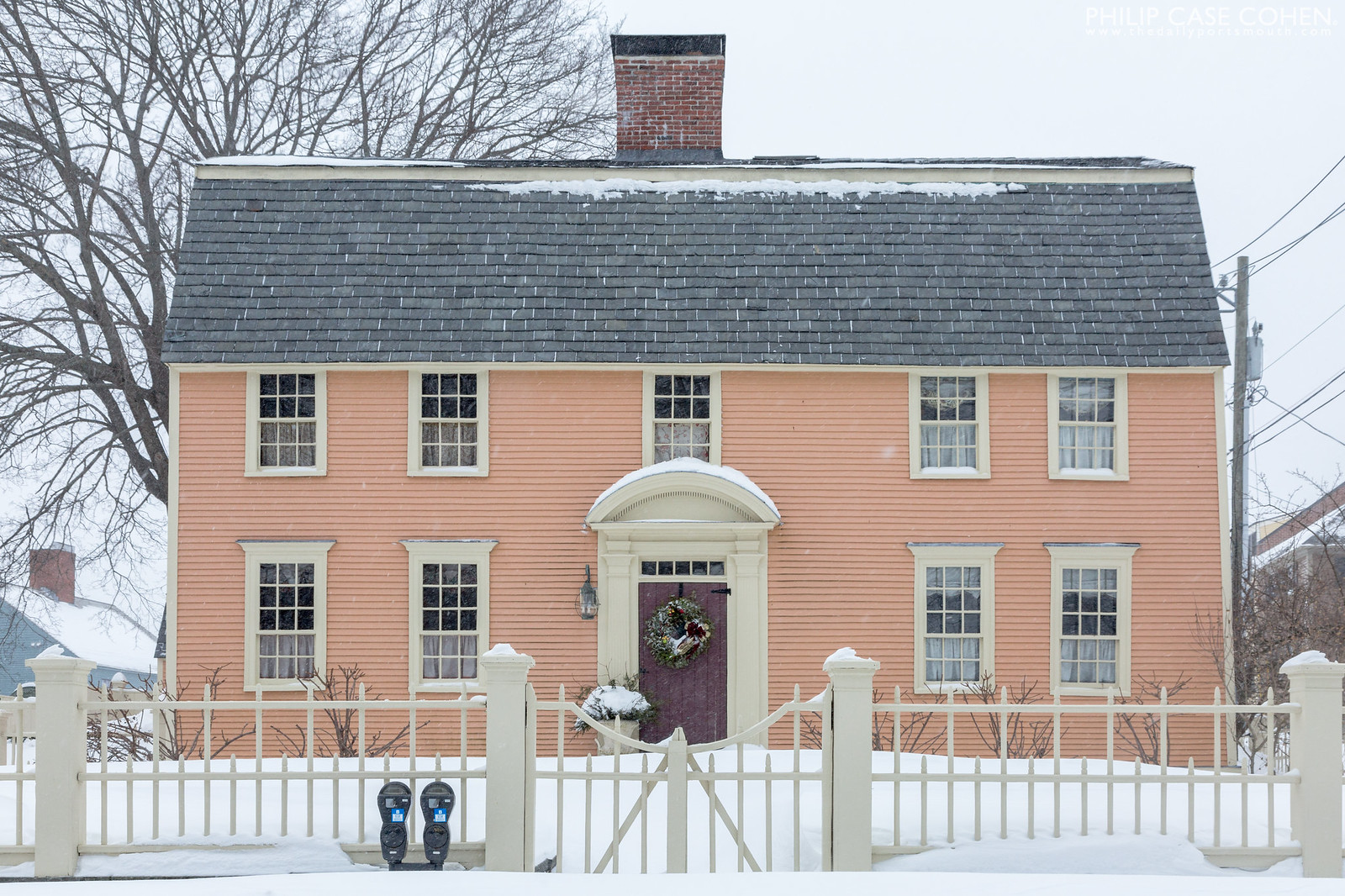 The Oracle House amidst a light snow in the winter of 2015.  This house was originally built in 1702 and is one of the oldest homes in New England. 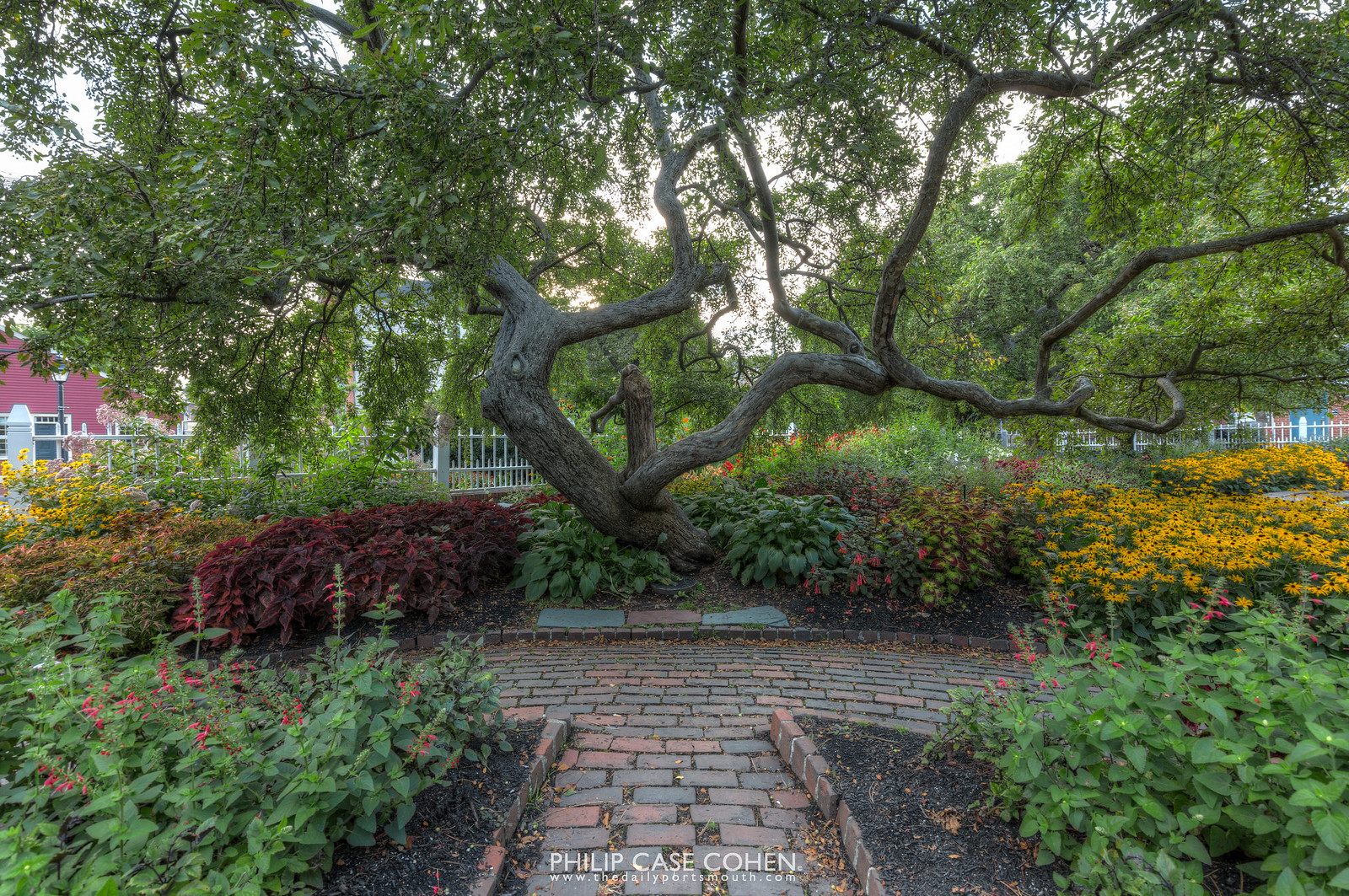 The garden in Prescott Park is a colorful, inviting and peaceful little spot tucked between Marcy Street and the open grounds of Prescott Park.  With fountains and wizened old trees, there aren’t very many (if any) places you’ll find downtown that have the same magical feel.

One of my favorite roads in Portsmouth is Marcy Street.  It is incredibly narrow in spots – to the point where it feels as though one is risking an accident with either a pedestrian, car or telephone pole just by driving up the street.  Along the street there are several historical landmarks including Prescott Park, Strawbery Banke, the Peirce Island bridge, a cemetery, and homes dating back centuries leading towards the waterfront.

Something about the little round granite posts along Prescott Park on Marcy Street drew me in…with the wet stonework in the foreground and the barrier set by the posts, the rhythm of the old homes on the street beyond looked very cool. I love the two old houses that flank the end of Court Street, with the Oracle House (orange home on left) recently being sold. It’s a beautifully maintained old gem…and its neighbor on the opposing side of the street looks to be getting a cleanup too.

The Player’s Ring is a 19 year old organization located inside this 19th century brick building on Marcy Street, along the border of Prescott Park.  I’ve always loved the personality of this little structure, and I know some of the players who are regulars in the performances…and they are fascinating & great people.  Check out the building sometime and treat yourself to a play – if the poster in the door is any indication, it’s full of originality.

Marcy Street links the Prescott Park area with the South End along the waterfront of the Piscataqua River.  The historic architecture defines the feel of the neighborhoods in this part of town, with some gorgeous structures and some sidewalks that still feel like historic walkways with their well worn bricks.  I’ve always liked this house, but never stopped to photograph it in the past…its front gate has tons of character.  It’s somehow both welcoming (almost like the house is smiling) yet a warning to anyone who feels like exploring.

Here is a little taste of the South Mill Pond as seen in the late afternoon/early evening.  I’ve always adored the little house & building right on the water here across from Sanders Fish Market.  I’d never crept down onto the rocks until this afternoon – and it gave me a much better view of the water as it streamed into the South Mill Pond from the Back Channel as the tide was coming in.

The blurred water is the product of a long exposure….which was due to the use of the neutral density filter to darken the lens…which also lends a warmer feel to the image with all of the sunlight that was allowed into the camera’s sensor during the shot.

Well, it appears to be official…The Dunaway Restaurant, which is located on Marcy Street alongside Strawbery Banke (and was recently sold), has been repainted and all its old signs have been removed.  This leads me to believe that The Dunaway has officially been done away with.  I’m still waiting for word on what might reside in the building going forward….right now it looks to be a new restaurant with an anticipated opening date of Spring 2010, see the old website here.

This rainy weekend was the first time I’d seen the building since it received its new red coat of paint, replacing the old eggplant color.  Anyone have any news they can share?

Yet another of Portsmouth’s gorgeous spires/clocktowers, this one located atop the former location of the Children’s Museum, which has since relocated to Dover, NH.  This old building is located along Marcy Street in Portsmouth’s historic South End, just beyond Prescott Park as you head towards New Castle.  This spire hasn’t been as fortunate as the North Church, which saw a full restoration in recent years.

Yet another of Portsmouth’s gorgeous spires/clocktowers, this one located atop the former location of the Children’s Museum, which has since relocated to Dover, NH.  This old building is located along Marcy Street in Portsmouth’s historic South End, just beyond Prescott Park as you head towards New Castle.  This spire hasn’t been as fortunate as the North Church, which saw a full restoration in recent years.