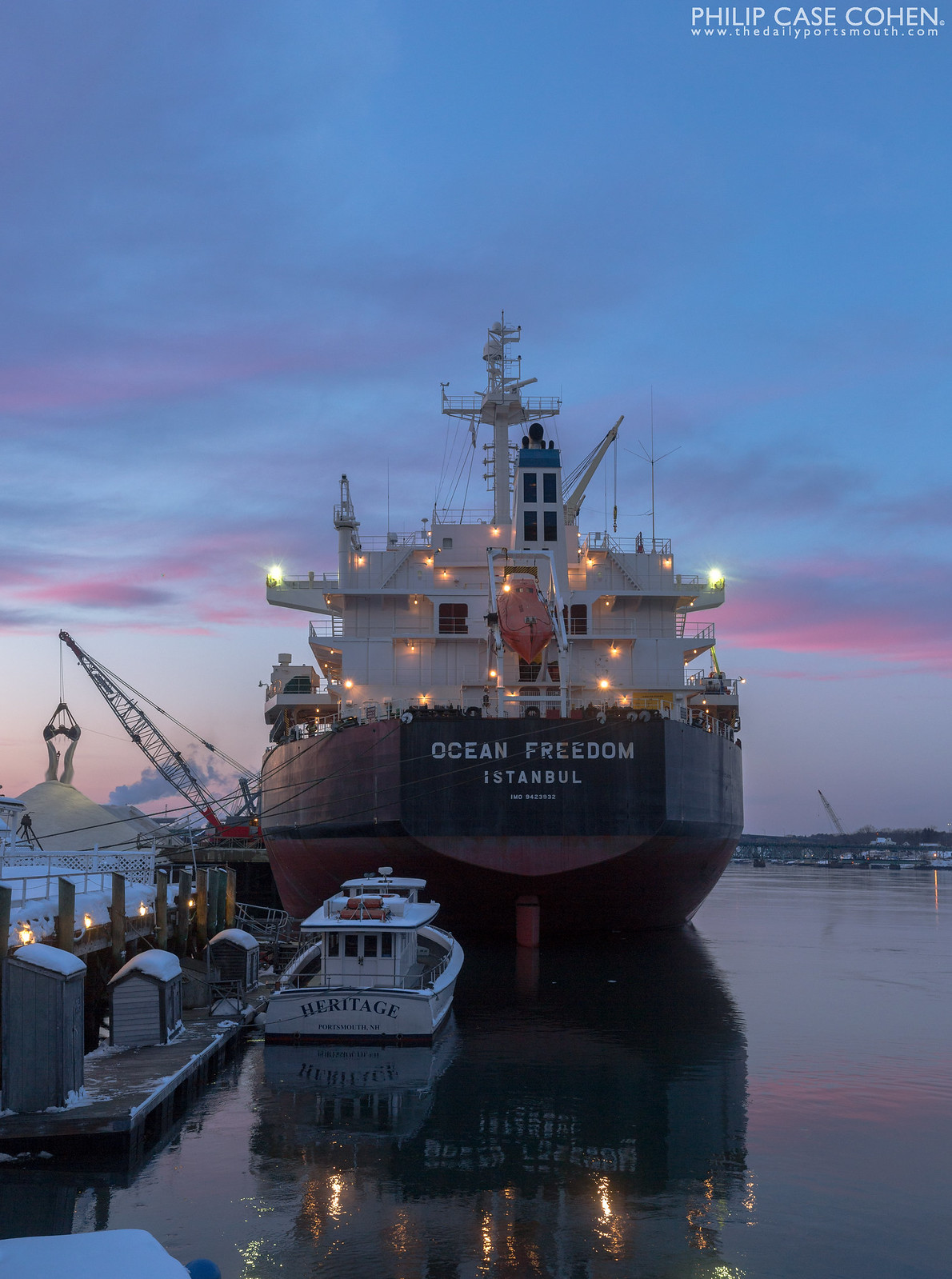 A freighter visiting Portsmouth from Istanbul is unloaded on a warm winter evening ahead of another deep freeze, helping to replenish the shrinking salt piles. 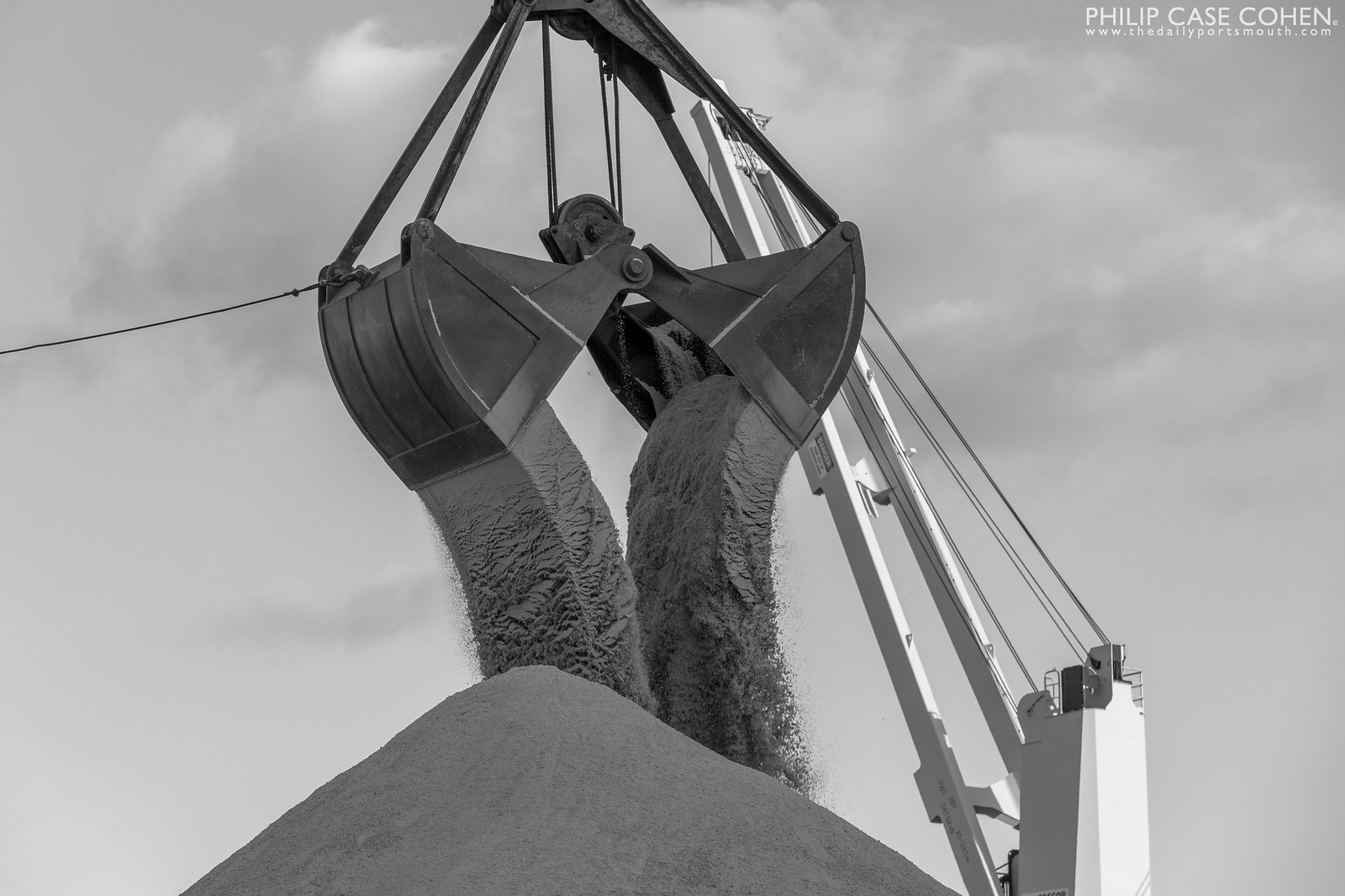 Enjoying the view of Granite State Minerals and the very laborious process of getting salt off the ships onto the White Mountains of Portsmouth. 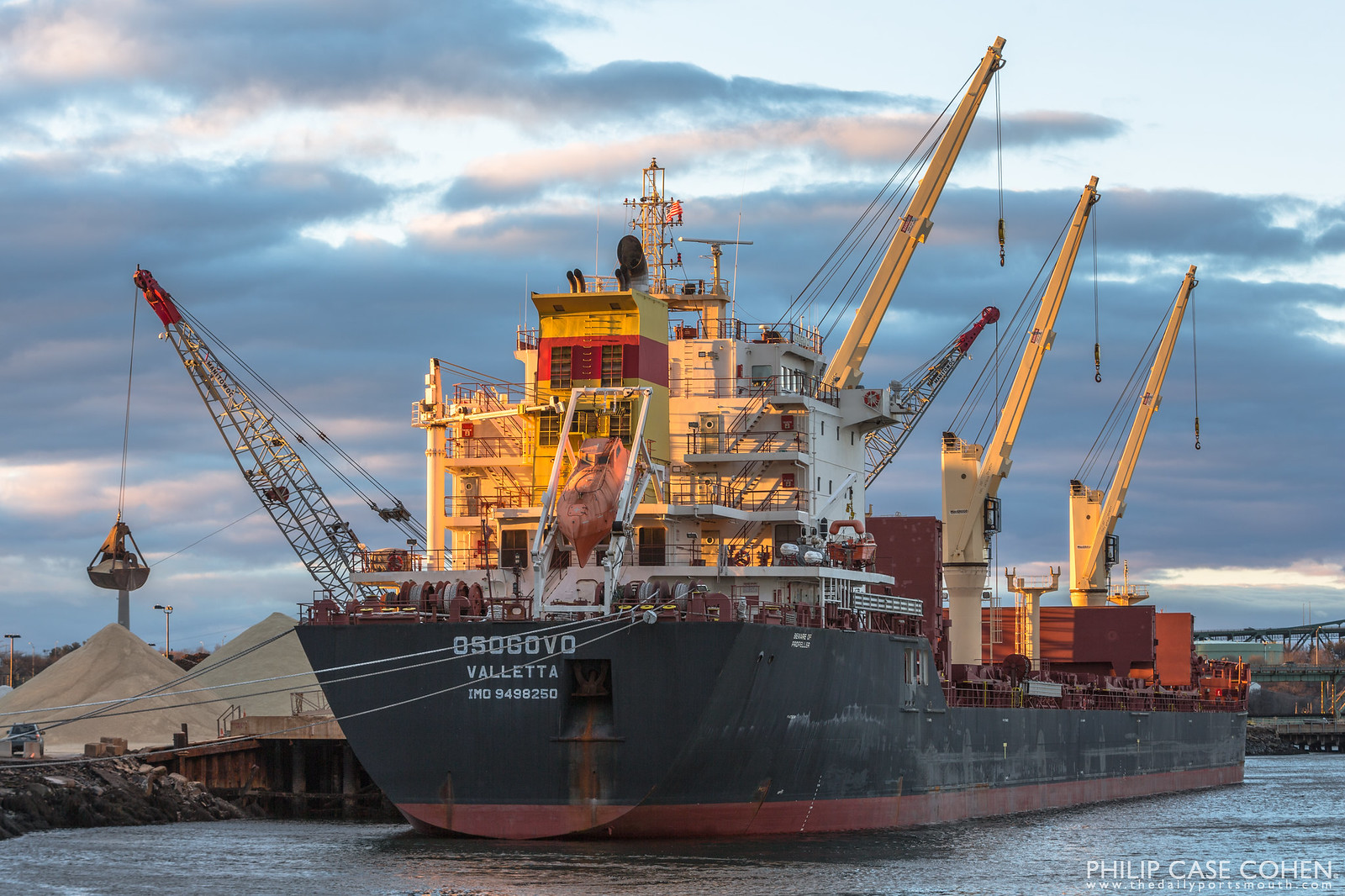 OSOGOVO basks in the light of the end of the day as salt is unloaded onto the Granite State Minerals terminal.

It’s no secret that I am obsessed with freighters that navigate the Piscataqua River.  I had the opportunity to shoot from the deck of Osogovo, which was recently in port and unloading salt at the Granite State Minerals terminal on Market Street.

Portsmouth’s serene and industrial waterfront enjoys the last few moments of sunlight.  My favorite part is the little cloud hovering over the gypsum plant on the horizon, still illuminated with the rich orange light of the late day sun.  The cranes and sand piles sit calmly, as I imagine they’ll do for a few months until the massive mounds of sand and salt won’t be needed for a couple seasons.

I thought it was time to mix it up and return to some working waterfront images after all the waterfront beach shots featured recently.  With the onslaught of winter we’ve been having since 2011 arrived, I had been amazed that the sand/salt piles at Granite State Minerals shrunk as much as it did.  That meant one thing – more freighters would be in town soon…so that local trucks could come to the rescue of Public Works departments across New England.  Sure enough, upon getting back from Miami on Tuesday…I was greeted by two freighters in port.

The night shot add a dimension to the working waterfront feel for me, as we’re all used to seeing boats do their thing during the day, but it’s more rare that I stop to appreciate the fact that the cranes move through the night until all the minerals are unloaded.  Here is a glimpse of the freighter along with the Heritage (the boat I take most often for some summer weather harbor cruising).

It is sounding like we might be graced with more white fluffy stuff from the skies over the weekend.  In honor of that, here’s another take on the salt piles along Market Street….which will play a huge role in keeping our streets drivable.  Thanks to Granite State Minerals for keeping New England salted and sanded!  I’m hoping to get out for a round of snow shooting if it arrives.

More warmer weather & sunny images to follow over the next few days so stay tuned!

THE DAILY PORTSMOUTH
Create a free website or blog at WordPress.com.