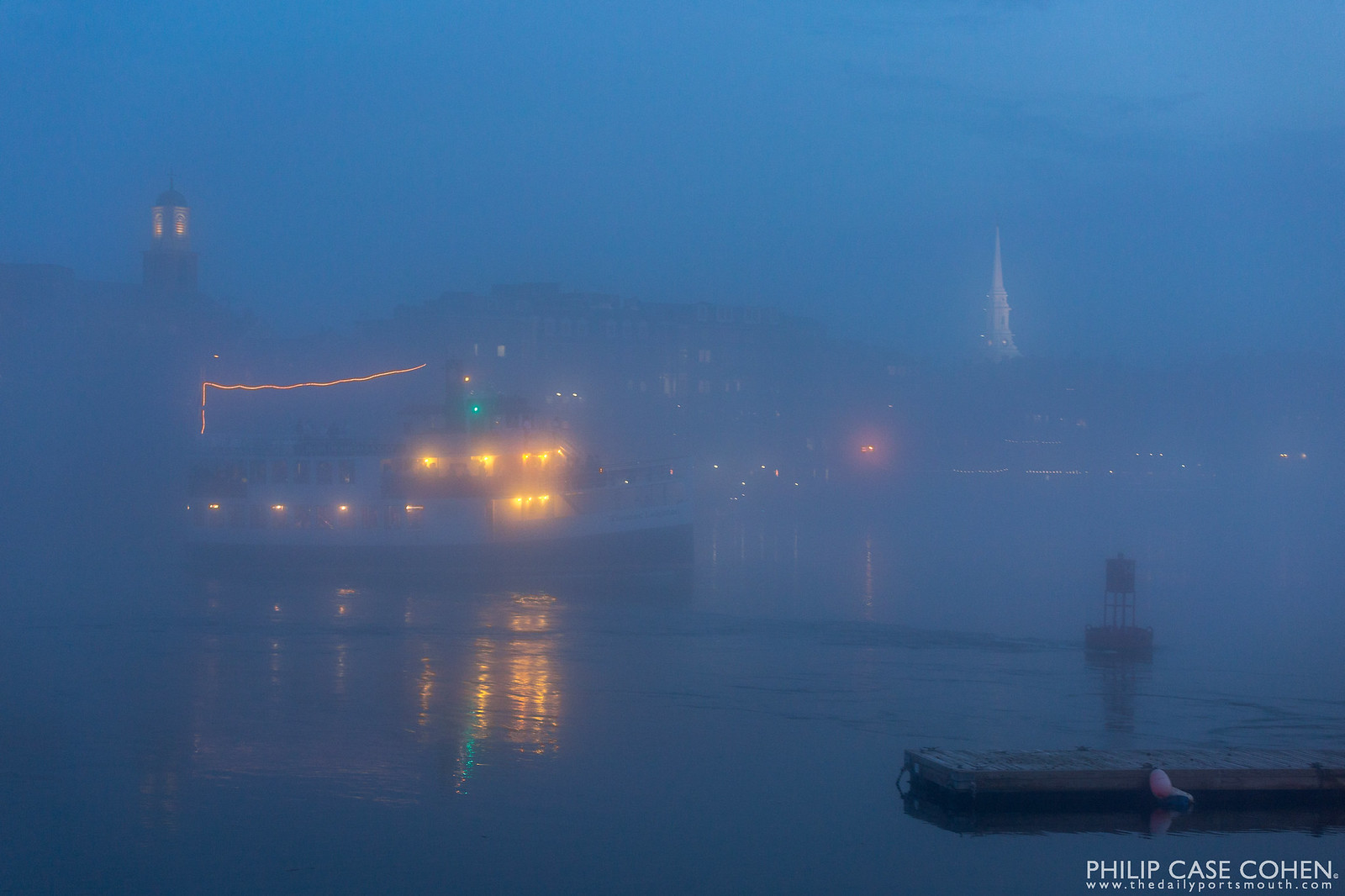 Blue In The Fog

The Isles of Shoals Steamship Company’s Thomas Laighton and its eerie lighting heads home amidst a thick evening fog.

I had an opportunity one afternoon to shoot from the rooftop of the Ale House Inn building.  Thankfully, the afternoon was fascinating – as the sun was setting, a storm had cleared and left behind some thick fog making everything to the west glow a soft orange color.  Beyond the cloud line and to the north and east the sky had a nice blue hue.  As I was packing up my gear to head home, the Thomas Laighton was heading out towards the Isles of Shoals creating some nice movement in the scene.

The fisherman cruises on the Piscataqua River at the end of a late spring day.  The Sheraton Harborside Hotel looms in the background as does the Isles of Shoals Steamship Company’s Thomas Laighton.

The two sources for fun on the water during the summer months in Portsmouth, NH are the Heritage and the Thomas Laighton.  The Heritage is an awesome little old-school style yacht (with a bar on deck) that is great for a late evening sunset cruise out towards Whaleback Lighthouse…as featured above covered in snow.  Below is the Thomas Laighton in the heart of the harbor-cruising season in years past, full of people ready to enjoy a long evening out on the water.  The Laighton is definitely a larger boat that heads out for longer periods of time…also offering a great time and a great way to enjoy the seacoast.

I decided to head across the river to see what the evening sunlight might bring.  Today’s featured shots are a bit less dramatic than typical photos shared on the site, but I was taken with the beautiful light and how it was hitting the skyline – and thought that the au naturale shots looked better than the dramatic styling (and I need a better zoom lens!).

There was some interesting boat traffic, a fisherman showed up later in the evening – he came underneath the Middle Bridge from further up the Piscataqua to check out the scene near the tugs, hung out for a few – and then headed back up river.  A tugboat returned to its resting position after escorting a barge under the Middle Bridge to one of the industrial tenants on the river…and the Sheraton, brick buildings and the Martingale Wharf just looked awesome in the orange glow.

Don’t worry – I got some great HDR shots that will be featured here later in the week….all in all, well worth the trip across the river…I just wish it was a bit warmer outside.

The Thomas Laighton, the ship owned and operated by the Isles of Shoals Steamship Company, sits docked at its home during the winter.  I’ve had the opportunity to get out for a couple evening harbor cruises on the boat, and I’ve been lucky to enjoy beautiful sunsets both times.  If you’re looking for a nice way to spend a warm spring/summer evening, you can’t go wrong in heading out into Portmsouth Harbor.